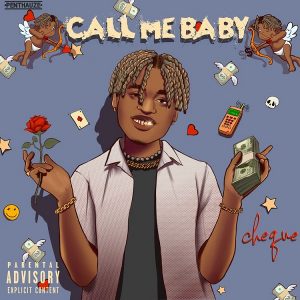 Cheque – Call Me Baby Nigerian serial hit-maker, Cheque whose real name is Akanbi Bamidele, rose to prominence and attracted media attention following the successful release of his 2020 song ‘Zoom’. He began his music career while still in college in 2015. In February 2019, After being discovered by Phyno during one of his Instagram freestyle rap performances, he was signed to Penthauze Records.

The Zoom crooner, Cheque bursts onto the music world again with his 2021 hit song and street vibe “Call Me Baby” which is going to take over the mainstream.