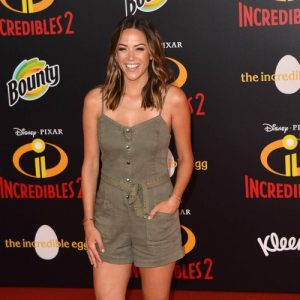 Jana Kramer sold her wedding ring from estranged husband Mike Caussin to fund a remodelling of her house.

The country singer admitted during a chat with fans on her Whine Down podcast that she’d parted ways with the diamond band, and the rest of the jewellery Caussin gave her during their marriage, to pay for the renovation.

“I sold my ring. And that money from the ring paid for the furniture and the new additions to the house,” she said. “I debated. I was like, ‘I’m going to sell this ring and then maybe buy myself something.’ Like a bag. My divorce present. (But) I was like, ‘Honestly, what would make me happiest is to have new energy in the house.’ So I took that money and gave it to my (interior designers).”

Kramer explained it was important for her to “create a new space that felt like me and felt like mine” after she filed for divorce in April and Caussin moved out of the marital home.

The 37-year-old has big plans for the property, including a “girlie” room where she can socialise with friends.

“So now, I have someone over right now painting the bar room,” she said. “I’m going to make it this really cool, girlie wine bar. So that’s helped me a lot.”

And this is not the first time the singer has chosen to ditch jewellery bought for her by the sportsman.

“It’s the second ring I’ve had to get rid of from him,” she said, as she referenced their previous break-up in 2016 when Caussin sought treatment for sex addiction. “Cause the first ring I was like, ‘I will never put this back on my hand.’ … I took every diamond he ever bought me and I sold them, because I didn’t want to look at them ever again.”