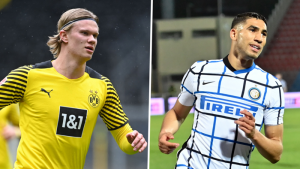 Chelsea have made contact with clubs and agents as they aim for a double summer deal of Borussia Dortmund’s Erling Haaland and Inter full-back Achraf Hakimi.

Any deal for Haaland would not only break Chelsea’s club record and wage structure but would also see Premier League records fall, with his agent Mino Raiola to earn a sizeable agent’s fee.

It remains to be seen whether Chelsea will make the move now when there’s less competition, or wait until the price drops in 2022 when a variable release clause based on performances is expected to see him leave for a price nearer £70 million ($99m).