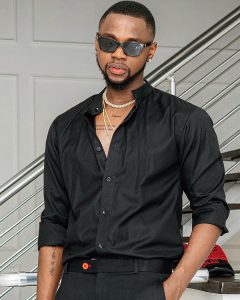 It would be recalled that Kizz Daniel celebrated his 27th birthday in grand style by welcoming his adorable twins on that same day.

Fans and top personalities in all walks of life took to his platform to celebrate the achievement with him.

Kizz Daniel has now decided to play his role as a father as he shares a video of himself dancing while carrying the twin.

The video which was shared on his official Instagram account has sparked a lot of reactions from fans and top personalities.