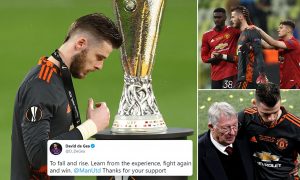 Manchester United goalkeeper, David de Gea, has vowed to bounce back, after missing the decisive penalty in their Europa League final defeat.

Both sides converted 21 spot-kicks before De Gea missed the 22nd.

De Gea has had to wrestle back his starting spot in the team, having been usurped by Dean Henderson midway through the season.

The Spaniard posted an image of himself and legendary United boss Sir Alex Ferguson on Instagram with the caption: “To fall and rise. Learn from the experience, fight again and win. @manchesterunited Thanks for your support”.

The decision to opt for De Gea over Henderson has attracted criticism given his record at saving penalties.

Not since the FA Cup semi-final in 2016 has De Gea stopped an effort from 12 yards.