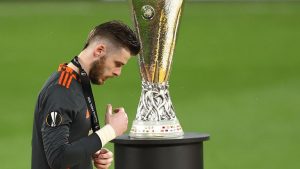 Manchester United manager, Ole Gunnar Solskjaer, has admitted that he thought about subbing on penalty specialist Dean Henderson, as spot kicks loomed in their Europa League final on Wednesday night.

However, Solskjaer insists he was “confident” in David de Gea, who played the entire game.

Although Henderson has emerged as United’s first-choice goalkeeper in the Premier League, starting 10 of the last 12 games, Solskjaer opted to go with De Gea against Villarreal.

De Gea faced 11 penalties and saved none, before missing the decisive penalty himself.

Since 2016, De Gea has saved none of the 25 penalties he has faced in all competitions, while Henderson has kept out 47% of the 17 penalties over the same period.

At his post-match press conference, Solskjaer was asked if he had considered bringing Henderson on for De Gea given their respective penalty records and replied: “It had crossed my mind in the build-up to the game but we were confident in David and we’d prepared.

“But anything can happen in a penalty shootout, so I stuck with the keeper who had played all of the game.”