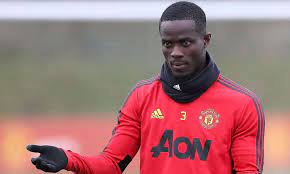 Manchester United defender, Eric Bailly, has warned the club that he would listen to other proposals if he doesn’t get regular playing time at the club amid interest linking Real Madrid’s Raphael Varane to Old Trafford.

The Ivory Coast international said he welcomed Man United’s push to sign a new centre-back this summer but insists he will not settle for a place on the bench.

Bailly has struggled with injuries since arriving at Man United from Villarreal in 2016 but signed a new long-term contract with the Red Devils last month.

It’s understood that Man United manager, Ole Gunnar Solskjaer, is prioritising the signing of a new centre-back this summer transfer window, with reports claiming that Varane, who has just a year remaining on his contract with Real Madrid, is at the top of his shortlist.

“Competition is always good to improve,” Bailly told The Times ahead of Man United’s Europa League final clash with Villarreal on Wednesday night.

“I just say that I want to stay in case I get the chance to play. I don’t want to be a starter one game and a substitute for another five.

“If that happens, I will have to look for another solution.

“The new contract is fine, but if I don’t play, I will be open to listening to other proposals.”