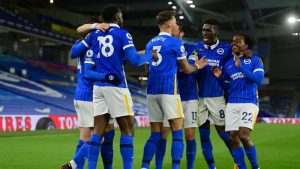 The South Africa star returned to Premier League action on Saturday and he played a vital role in helping the Seagulls to their only goal
Brighton & Hove Albion manager Graham Potter is full of praise for Percy Tau after his impact in their 1-1 draw with West Ham United.

Tau played a starring role in Saturday’s Premier League game at the Amex Stadium with his maiden assist that helped Danny Welbeck break the deadlock in the 84th minute.

It was the 27-year-old’s first league appearance since January when he played against Leeds United, three days after his debut outing against Manchester City.