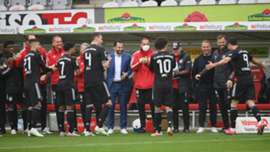 The prolific Polish striker has emulated the efforts of a legendary frontman who went before him in Bavaria
Robert Lewandowski has matched the record of Bayern Munich legend Gerd Muller by scoring his 40th Bundesliga goal of the season in a meeting with Freiburg.

The Polish striker has been a prolific presence throughout a memorable spell at the Allianz Arena, with history-making efforts cementing his place in modern football folklore.

Many considered it to be only a matter of time before he emulated the achievements of Muller by becoming only the second man to reach the 40-goal mark in a single German top-flight campaign.