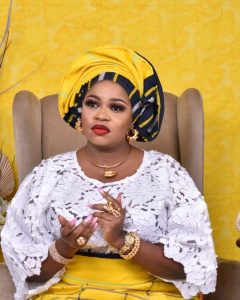 Born Mistura Asunramu Alao in Lagos state, is a Nigerian actress who is known for her roles in yoruba indigenous movies.

The beautiful actress joined the movie industry in 2002 through the “Awadakerikeri” organisation belonging to veterans in the industry; Adebayo Salami, Iya Awero and Sunday Bolanle.

She has alo starred in numerous movies including Gbogbo Ona, Oko Gbajumo, The Return of Jenifa, Obinrin lota Obinrin. She also produced movies like Fali Omo, Ake Baje and Aye Ajifa, before relocating to USA with her family.

The Actress Celebrate her 40th birthday today May 11, Sharing the post on her Instagram page she wrote;

As a Naija Born , its Officially my Birthday ..When i look back, all i realise is that theres no 1 like God.. So many Challenges i have faced.. So many stages i passed thru.. This year God saved me alot.. This year i am called Blessed.. Thank you Lord.. Kosobabire.. Anu timorigba iyebiyeni.. koseni bire.. Arabataribiti..Aribitirabata

The Actress Shares Another post where she Praises herself,In caption;

See her beautiful photos below;