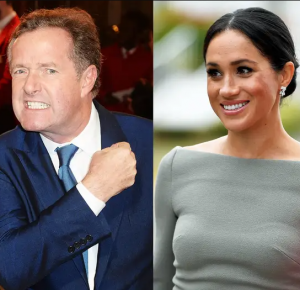 Piers Morgan has slammed Meghan Markle after she wrote a children’s book about father-child relationships.

The TV host said Meghan’s book titled The Bench would make the shortlist for the title of World’s Most Ludicrously Inappropriate Book.

He accused Meghan of having a “seemingly unlimited thirst for committing attention-seeking acts of gargantuan hypocrisy” and said he laughed out loud when he heard about the book.

He went on to ask how Meghan can write a book about father and child relationships when she has disowned hers. He also blamed her for the strain in Harry’s relationship with his father.

Piers wrote for Daily Mail: “Lest we forget, Ms Markle has ruthlessly disowned her father Thomas and refuses to have anything to do with him despite the fact they now live just 70 miles from each other.

“She is also reported to have disowned every other Markle, none of whom were invited to her wedding.

“This doesn’t seem like someone overly keen to operate ‘an inclusive lens’ to me. In fact, it seems a singularly EX-clusive lens.

“She also spray-gunned Thomas in her lie-packed Oprah whine-a-thon in a manner that was more ‘ice, rage and irritation’ than ‘warmth, joy and comfort’.

“As for Harry, he trashed his father Prince Charles in the same interview, moaning about how Daddy had stopped taking his calls or giving him cash, sounding like some needy spoiled brat teenager rather than a 36-year-old multi-millionaire doormat who ditched his family, country and duty because his chillingly controlling and ambitious wife wanted him to

“And unforgivably, he did this as Charles was desperately worried about HIS father, Prince Philip, who was lying seriously ill in hospital and later died.”

Piers went on to say Meghan is the last person he would take parenting advice from.

He wrote: “I don’t wish to rain on the comically sycophantic parade – but I suspect this book will become an instant historical classic for all the wrong reasons.

“The whole notion of Meghan Markle dishing out advice to anyone about the relationship between fathers and children is absolutely ridiculous given the appalling relationships she and her husband have with their own fathers.

“Yet her brazen decision to do it anyway is so sadly typical of a woman whose tendency for staggering hypocrisy is only matched by her extraordinary tone-deafness.

“I’d honestly rather hear parenting tips from Britney Spears’s god-awful father because at least they still talk to each other.”

Piers also called Meghan demeaning names in the opinion piece he titled, “How the hell can Meghan ‘I hate royalty but call me Duchess’ Markle preach about father-child relationships when she’s disowned her own Dad, and wrecked her husband’s relationship with his?”