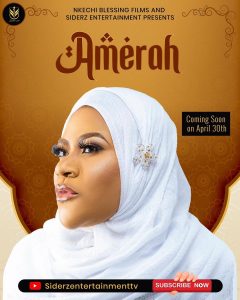 Recently, popular Nollywood actress, Nkechi Blessing, has been sharing on her Official Instagram page about a new movie that she will release, and she has titled the movie “Ameerah” where she would probably be acting like a Muslim lady. She has posted some previous pictures where she had to dress like a Muslim lady, and more precisely, she was using an Hijab.

Thus, when she shared a new picture tonight as she was wearing an Hijab, many of her fans were hailing her, and some of them were calling her “Alhaja Nkechi Blessing,” meaning that they were calling her a Muslim sister just because of the way she dressed.

See some of the comments people made below:

See the photos below;