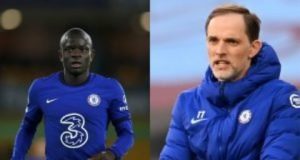 Tuchel said Kante lacked the last pass and could have been more decisive during Chelsea’s clash against Real Madrid.

The former PSG manager believes the France international wasted attacking opportunities against Zinedine Zidane’s side, adding that it was a pity that Mateo Kovacic didn’t feature for Chelsea against the LaLiga champions.