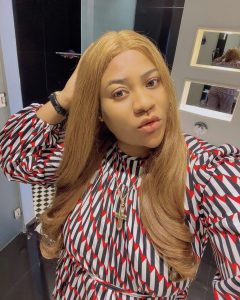 Earlier today actress Nkechi Blessing Sunday (NBS) who is an actress, a producer, a brand ambassador and an entrepreneur Shared a post where she cursed her friends who acts like her enemy. She revealed under the post that her so called friends has been defaming her on her husband’s DM and his Friends DM, they have been saying demeaning things about her trying to bring her down so that the man God sent to her on a platter of Gold (her husband) leaves her.

Some of them even went as far as creating a fake instagram account to chat with her hubby, just to destroy her name

However Fans reacted to the post, some says she’s to be blamed for bringing her relationship to social media while others says amen to the curses she layed on her so called friends and colleagues.

The actress cursed the friends/Colleagues and their generation and this triggered lots of reaction.