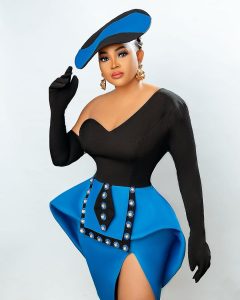 Mercy Aigbe is a Nigerian actress, model, director, business woman and fashion entrepreneur. She was born on the 1st of Januar, 1978. Mercy Aigbe attended the Polytechnic of Ibadan where she received her OND in Financial Studies before obtaining a degree in Theatre Arts from The University of Lagos.

Mercy Aigbe started her career by starring in soap operas before she joined the Nollywood Industry professionally in 2006. She became very popular when she acted in the movie titled “Ara”. The movie was produced by Remi Olupo in Ibadan, Oyo State.

Mercy Aigbe is best known for her Yoruba indegenious movies such as Ara, Afefe Ife, Oju Ife, Victims, Ile Okomi, The Screen Play, Little drops of happy and so many more. Her latest movie is titled “Ete” and it was released on YouTube earlier this month.

Recently, Mercy Aigbe took to Instagram to share some indecent photos. The photos are from a selected scene in the movie “Haunted Pleasures” which is still currently filming. The movie is being produced by Mercy Aigbe.

The photos showed popular actor, Joseph Momodu in an indecent situation with an unknown actress.