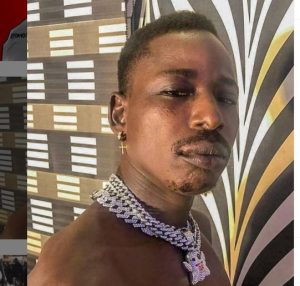 Trending Dampte, who had embarked on a tour of Africa owing to his music career, arrived in the city of Lagos some weeks back.

He had previously announced that his coming to his home country was due to projects that needed to be executed here such as videos, media rounds, recording of new projects, et al.

At the birthday, BlackCamaru was said to have graced the well-attended event, adding glitz and glamour to the occasion. As everyone knows that his swagger and countenance alone could make one laugh, he put on those manners while he composed a special song and prayed for the birthday girl, after which the cake was cut.

While Kamaru, no doubt, was thrilling the guests to stupor here in Nigeria, the birthday girl and her friends were also celebrating in the UK, where Iyanu is based.

Some guests who came around were friends of Dampte and Iyanu’s uncle, a music executive and founder of Don Crucifixto Entertainment boss, Tumi Oluyole, who just signed three new acts.