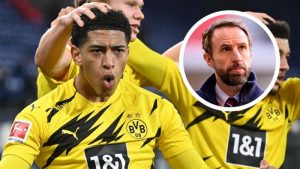 The ex-Birmingham City star does not turn 18 until June, but his performances this season mean he deserves a place in Gareth Southgate’s 23-man squad
At 17, Theo Walcott was included in the England squad for the 2006 World Cup in a decision by coach Sven Goran Eriksson that shocked many, including the player himself.

“I was thrown into the limelight straight away having not even played a Premier League game, and suddenly you are surrounded by these top-quality players and you are thinking, ‘Do I deserve to be here?’,” Walcott told the Evening Standard .

“I just had to deal with it. I’ve had a lot of experience since then and earned quite a few caps. Being around top players helps you learn, but it was too early in my career.”