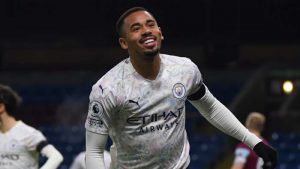 The German midfielder has heaped praise upon his team-mate ahead of the Premier League leaders’ trip to Borussia Dortmund
Ilkay Gundogan has expressed his belief that Gabriel Jesus can become a “world-class striker” amid the ongoing rumours linking Erling Haaland with a move to Manchester City.

It has been reported that City will be on the lookout for a new striker in the summer transfer window, with club legend Sergio Aguero set to call time on his illustrious 10-year career at Etihad Stadium at the end of the season.

Gabriel Jesus is the only other natural centre-forward on Pep Guardiola’s books at the moment, and has yet to prove he can be the man to fill the Argentine’s boots in the long-term, but Gundogan has no doubts about his ability.