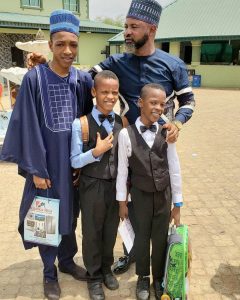 Showing off his 3 boys at Club and Cultural Day at their school, actor Akin Olaiya wrote; Club day and Cultural day at my children school. To be a responsible fathers hmmmm, anyway Alhamdulilahi Robiliallim he said. Akin Olaiya is a fantastic Yoruba actor who has carved a niche for himself in the movie industry. Akin Olaiya has produced several Blockbuster movies, he is one of the most sought after actors we have in the entertainment industry. Akin Olaiya has proven to be one of the best actors over the years. This talented actor serves as role model to many upcoming actors. His method of interpreting movie script is top notch. Actor Akin Olaiya is one of the actors that commands respect for themselves. This actor is no doubt a force to reckon with.