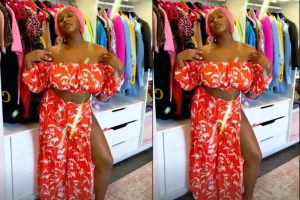 It looks like whether rich or poor, mothers will always be mothers and will always want to correct their children when they want to go wrong.

A similar scenario played out in the case of billionaire daughter, Ifeoluwa Otedola and her mother, Nana Otedola.

DJ Cuppy recently shared the message she received from her mother after she posted the photos above on her IG stories.

Cuppy’s mother, Nana sent her direct message on Instagram stating that she revealed ‘too much skin love.”

Cuppy who is 28 posted the screenshot via her social media handle as she stressed that her mom is still on her at her age.

This had left many of her followers reacting as many stressed that mothers are the same everywhere.