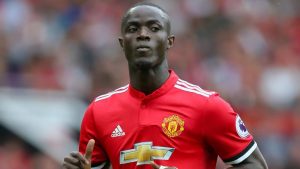 Amad Diallo, who made his international debut for the Elephants during their 3-0 defeat of Niger on March 26, is back in Manchester and was an unused substitute at Old Trafford.

Solskjaer, in his team’s update, disclosed that Bailly – who was an unused substitute in Ivory Coast’s final Africa Cup of Nations qualifying match against Ethiopia last Tuesday – is yet to return to England and will not be available for selection for the time being.

“Unfortunately he won’t be with us for a little while,” Solskjaer was quoted by the club website after the game.

“He’s been away with Ivory Coast and he tested positive with Covid and he’s not back in the country yet.”

Bailly has played in 15 matches across all competitions this season, including eight appearances in the Premier League so far.

Last month, Solskjaer said Manchester United are in talks over the renewal of Bailly’s contract after he made his 100th appearance for the club on March 11 against AC Milan.

The 26-year-old has been at Old Trafford since 2016 following his permanent signing from Villarreal but reports suggested that he could reject the club’s new offer due to his lack of playing time.

In Bailly’s absence, Solskjaer will be expected to go with the partnership of Harry Maguire and Victor Lindelof at the centre of his defence.

Next up for Manchester United is a Uefa Europa League quarter-final match against Granada on Thursday before they visit Jose Mourinho’s Tottenham Hotspur for a Premier League fixture on April 11.