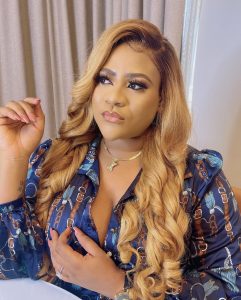 The actress shared the pictures on Instagram as she also revealed that her son’s second birthday would be in six days..

only God made it possible to groom you into such a handsome, Smart kid.”

Nkechi Blessing is one of the popular actresses in the movie industry.

She was recently in the news after she and controversial crossdresser Bobrisky dragged each other on social media over tattoo.