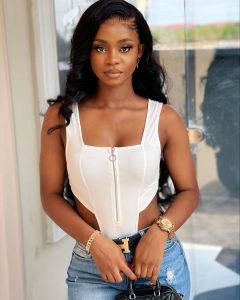 Actress Iyabo Ojo’s daughter, Priscilla Ojo has for the second time gotten a chance to feature in a music video with rapper and YAGI Records owner, Lil Kesh.

The new song which is titled ‘Love like this’ also comes with a feature from his former label (YBNL) artiste, Fireboy DML.

She wrote: “Drop some

Priscilla had previously featured in the video of Lil Kesh’s 2019 song ‘Nkan be’.

There are reports that they are in a relationship, but both of them have denied any intimacy between them.