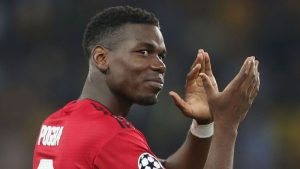 Manchester United’s Paul Pogba has been included in the UEFA Europa League team of this week.

UEFA released the Europa League team in a post on its official website on Friday morning following the conclusion of the round of 16 second-leg fixtures on Thursday night.

Pogba was impressive for Man United as he scored the only goal that ensured the Red Devils defeated AC Milan 1-0 at San Siro to qualify for the last-8.

The France World Cup winner made the list alongside Dinamo Zagreb’s Mislav Oršić.

Below is the UEFA Europa League team after this week’s last-16 second-leg fixtures: