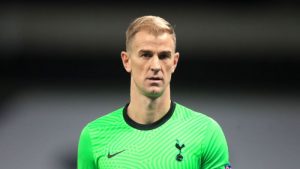 Tottenham goalkeeper Joe Hart has apologised to fans after a post saying “job done” was published on his Instagram account on Thursday night following the 3-0 defeat to Dinamo Zagreb.

Spurs threw away a 2-0 first-leg lead to lose the Europa League last-16 tie 3-2 on aggregate in Zagreb after an inspired hat-trick from Mislav Orsic.

After the game, Spurs boss Jose Mourinho gave an honest assessment of Tottenham’s performance, and apologised to the fans for another below-par showing.

But Tottenham fans noticed that a post-match message on the story of Hart’s Instagram account, which has since been deleted, said “job done” along with a green tick emoji.

The former England international issued an apology to Tottenham supporters on Friday morning, saying that a member of his social media team had mistakenly published the post.

“Morning guys, I feel like I need to come on and make an apology on behalf of my social media team,” he explained.

“It has just been brought to my attention, I’ve literally just woke up, that someone thought that we’d won 3-0 last night.

“As sloppy as it sounds, it’s the truth. Posted ‘job done’.

“That’s unacceptable and I’m sure it’s annoyed a lot of people and I’m sorry it’s come to that.

“It’s obviously not come from me and I’ve got nothing but love for the club and support for the team.

“I’m just as down as the boys are, so apologies.”