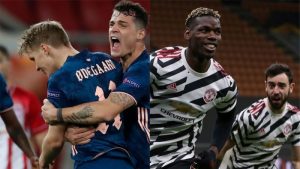 Manchester United have been drawn to face La Liga side Granada in the quarter-finals of the Europa League, while Arsenal will take on Slavia Prague.

United, who overcame AC Milan 2-1 on aggregate in the round of 16, will face the Spanish club in the last eight, while the Gunners are up against the Czech outfit who saw off Leicester City and Rangers in previous rounds.

Ajax play Roma and Dinamo Zagreb have been drawn against Villarreal in the other quarter-final match-ups.