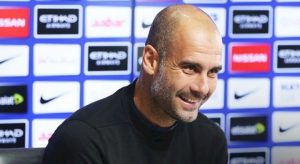 Pep Guardiola has lauded “incredible” Manchester City star Ilkay Gundogan, describing him as “one of the most intelligent players I have ever seen”.

Gundogan netted his 15th goal of the season to help City record a 2-0 victory over Borussia Monchengladbach in the Champions League on Tuesday night.

Guardiola’s side progressed to the last eight of the competition 4-0 on aggregate after the win, and the Catalan singled out Gundogan for special praise in his post-match interview.

“He’s always had a sense of [where the] goal [is], playing for [Borussia] Dortmund,” Guardiola told reporters.

“He’s an incredibly nice guy. He’s one of the… I will never forget the time we spent together. As a player he is one of the most intelligent, wisest players I have ever trained, I have ever seen.

“This season, every time he has arrived near the goal, he has scored the goal, he has this quality but not just that. I’m so delighted with the performance from Ilkay again and from all of the team.”