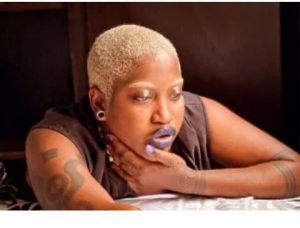 Nigerian singer, Temmie Ovwasa has confirmed reports about her sexuality as a lesbian.

Temmie on Saturday confirming that she is a lesbian, expressed disgust at ‘lesbian ancestors’ who hid their sexuality and put up with men.

She also slammed those who forcing “the very existence of compulsory heterosexuality” on her.

The former YBNL singer in a tweet, said she always feels disgusted anytime someone projects heterosexuality to her.

Her tweet read: ”Every time someone projects heterosexuality unto me I am immediately consumed with the disgust of all my lesbian ancestors that hid in the closet and put up with men.

I’m not just a Lesbian, I am disgusted by the very existence of compulsory heterosexuality, disgusted to the core.”

Recall, the former YBNL princess had sometime in December caused controversy on social media after she accused her label boss, Olamide of not giving her a platform to showcase her dreams.