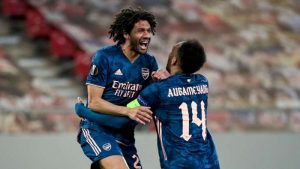 Goals from Martin Odegaard, Gabriel and Mohamed Elneny have put the Gunners on the verge of the Europa League quarter-finals

Arsenal did their best to shoot themselves in the foot again but instead they have one foot placed firmly in the Europa League quarter-finals.

It looked like being the same old story for Mikel Arteta’s side when a calamitous error by Dani Ceballos allowed Olympiacos striker Youssef El-Arabi to cancel out Martin Odegaard’s thunderous first-half opener.

But unlike at Burnley at the weekend, Arsenal picked themselves up. Goals from Gabriel Magalhaes and Mohamed Elneny ensured they will return to north London with a commanding 3-1 advantage over the Greek champions ahead of next Thursday’s second leg.

It was no more than they deserved after a dominant performance in Piraeus, but Arteta knows that if his side are to go on and win this competition, then they have to cut out the monumental errors that have plagued their performances in recent weeks.

“We are really pleased with the result, with the goals and the way we played in big moments in the game,” the Arsenal boss said after Thursday night’s win.

But as well, we have to be very clear an honest with ourselves. We gave three goals to the opponent, they took one and at this level they are going to punish you.