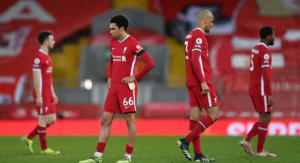 The result against Chelsea means it was Liverpool’s fifth consecutive defeat at home, which is their worst run at Anfield in the club’s entire history.

The loss to Chelsea is also the first time a reigning Premier League champion has lost five league games at home in a row, Metro UK reports.

The Reds are now facing an uphill battle to secure a place in next season’s UEFA Champions League.

Jurgen Klopp’s side are currently in the seventh position on the Premier League table with four points behind fourth-placed Chelsea.

Liverpool’s next game is against Fulham at Anfield on Sunday.