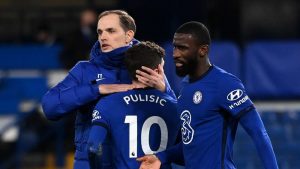 Antonio Rudiger says Chelsea are paying no attention to the exploits of rampant Manchester City, with Thomas Tuchel’s side ignoring the Premier League title race as they brace for a top-four “battle”.

The Blues have come back into contention for Champions League qualification after making a change in the dugout, with club legend Frank Lampard paying the price for early inconsistency in 2020-21.

Chelsea are up to fifth in the table, one point behind capital neighbours West Ham, and have momentum building after going nine games unbeaten under a new coach.