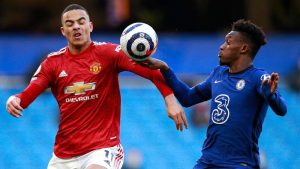 The decision not to award Manchester United a penalty against Chelsea after Callum Hudson-Odoi handled in the area prompted a confused reaction from Red Devils defender Luke Shaw.

Blues star Hudson-Odoi touched the ball with his hand in the area while tussling with Mason Greenwood for possession during the first half.

After consulting with VAR, however, referee Stuart Attwell determined that the contact was not grounds for a penalty, to the chagrin of the visitors.