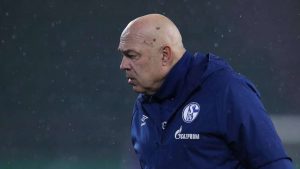 Christian Gross claimed that reports of a player revolt within the Schalke dressing room “caused great unrest” after the former Tottenham boss was sacked on Sunday.

Gross was relieved of his duties at Veltins-Arena, along with three members of his backroom staff, with the club now on the lookout for their fifth head coach of the 2020-21 campaign.

It has been reported that several members of the first-team squad had started to rebel against the Swiss coach’s methods, which he believes played a key role in his dismissal.