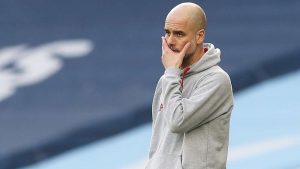 Pep Guardiola insists Bayern Munich are the best team in the world despite Manchester City’s recent run of form.

West Ham boss David Moyes suggested the Premier League leaders are the best team in Europe after their 2-1 defeat at the Etihad Stadium on Saturday.

That win saw City extend their current winning streak to 20 matches – a record for an English top-flight club – but Guardiola said Liverpool, as reigning champions, should be considered the best in England, and Bayern the best in the world.