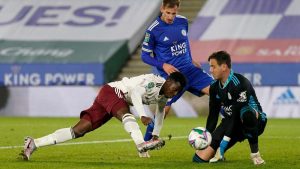 The Londoners have lost last three away league matches against the Foxes, receiving more red cards, two, than goals scored, one, in the process

Leicester City will welcome Arsenal at the King Power Stadium aiming at getting maximum points in order for them to move to the second position and close the gap to leaders Manchester City in the English Premier League.

However, it will be a tough task considering the visitors are 11 points off the Champions League places and believe they can still finish in the top four by the end of the season.

The hosts have bagged maximum points in three out of their last five home league matches. They have been backed to get a win on Sunday at (2.60) with BetKing.