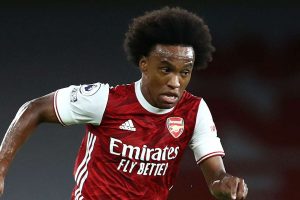 Arsenal winger, Willian, has revealed he ‘really wanted to stay at Chelsea’ but was forced to leave the West London club due to a disagreement over his contract.

The Brazilian international said this ahead of Arsenal’s away Premier League clash against Leicester City on Sunday afternoon.

The 32-year-old, who played 339 times for Chelsea, won two Premier League titles and a Europa League title during his seven years at Stamford Bridge.

“It was difficult to make that decision,” Willian told UOL Esporte.

“Because the rivalry between the two clubs is very big, it was well thought out talking to my wife and even the agent many times.

“I didn’t leave the club with a fight. I left the doors open. Everyone knew the conditions. I really wanted to stay.

“We ended up not finding an agreement, I ended up asking for three years, Chelsea wanted to give two, and everyone knows this story. That’s why I ended up leaving.”

Willian is yet to score for Mikel Arteta’s men and has registered just four assists in 26 appearances for the Gunners.