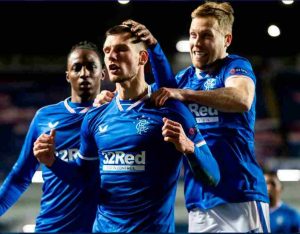 OVERVIEW OF: Europa Round Of 32: Aribo, Balogun In Action As Rangers Net Five Past Antwerp; Osimhen’s Napoli Crash Out

Super Eagles duo Leon Balogun and Joe Aribo featured as Rangers booked their place in the round of 16 of the Europa League after defeating Royal Antwerp 5-2 in Thursday’s second-leg, NK Media reports.

Rangers progressed 9-5 on aggregate after winning the away tie 4-3.

Aribo saw 90 minutes of action while Balogun was replaced in the 46th minute.

Rangers can now look forward to the draw for the next round, with ties due to be played on March 11 and 18.

In Italy, Napoli, without Victor Osimhen managed to beat Granada, but the 2-1 win was not enough to overturn their 2-0 first leg defeat which saw them exit the competition

It took under three minutes for Napoli to break the deadlock and halve the aggregate scoreline, as Piotr Zielinski surged forward through the centre, swerved to surprise Duarte and drilled in with his left boot from the edge of the box.

Granada had the ball in the net too moments later, but Puertas was a long way offside on the flicked-on free kick.

There was no flag on the equaliser, as Napoli made it too easy with no pressure on the Dimitri Foulquier cross or the Angel Montoro free header.

Fabian Ruiz made the most of a pass from Insigne to prod the finish past Rui Silva at the near bottom corner for 2-1 but could not get the two more goals needed to advance.

And in Spain, Villarreal progressed into the next round following a 2-1 win against Salzburg for a 4-1 aggregate scoreline.

Samuel Chukwueze saw action as he was introduced in the 66th minute for Paco Alcacer.