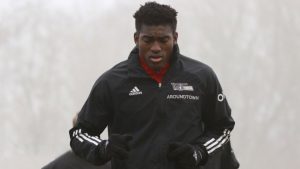 Union Berlin has confirmed Taiwo Awoniyi will spend time on the sidelines as a result of a thigh injury, reports NK Media.

Awoniyi missed last Saturday’s 1-0 away win at Freiburg due to the setback.

“Union Berlin will have to do without striker Taiwo Awoniyi in the coming weeks,” reads a statement on the club website.

“After detailed investigations, a muscle injury to the left rear thigh was confirmed, so that head coach Urs Fischer will not be able to fall back on the attacker’s services in the coming period.

The 23-year-old has been impressive for Union Berlin this season after arriving on loan from Premier League club Liverpool last summer.

The striker has scored five goals and provided four assists in 19 league appearances for the club.