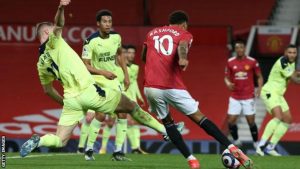 Marcus Rashford played a key role in a win over struggling Newcastle as Manchester United returned to second place in the Premier League.

The England striker helped the hosts overcome a stuttering start when he lashed in an 18th goal of the season by beating Karl Darlow at the near post after 30 minutes.

Allan Saint-Maximin then scored a deserved equaliser with his first goal since coming back from a two-month absence caused by coronavirus symptoms, slamming in after Harry Maguire failed to clear.

Watch the Highlight below: