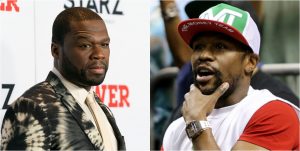 50 Cent is ready to fight his former friend Floyd Mayweather in a boxing match which would be organised before the end of the year, Daily Star.

Undefeated Mayweather called out his friend on a recent post on social media and the multi-platinum selling artiste has responded.

The former four-weight division champion said he was ready to take on 50 Cent regardless of his weight class.