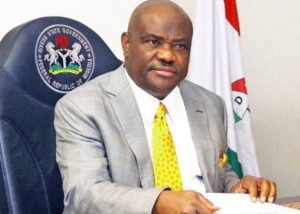 Rivers State Governor,  Nyesom Wike, has condemned the posture of some ethnic groups in the Niger Delta region that behave as if the Niger Delta Development Commission (NDDC) belongs to them.

The governor said the commission belongs to all states in the region and that no particular ethnic group could assert itself as the dominant owner of the commission, as has been observed of recent.
He stated this when he played host to the Interim Management Committee of NDDC led by Effiong  Akwa in Government House, Port Harcourt yesterday.

The governor also said such people  leave their states and come to Rivers to block the gates of the commission, cause crisis and frustrate economic activities in the state.
“Anybody can be appointed in Niger Delta. There are people who believe that if they appoint somebody from Edo or Cross River State for example, they will say no, that those people are not the core Niger Delta states. We must have to stop that.

“NDDC does not belong to any ethnic group in the Niger Delta region. It does not belong to anybody. There are people who have seen themselves that they are the owners of NDDC. They leave their state and come to NDDC to block NDDC gate. We are peaceful people, but nobody should push us to the point where we can tell you enough is enough.

“The next time they try it again to cause crisis in our state, I will mobilise our people against them. I am not saying if you have grievances with NDDC you shouldn’t seek how to settle it. But, don’t use it to cause problem for us, to begin to make economic activities not to move.”
The governor challenged the new interim leadership to be determined to make a difference, change the current narrative of the commission of serving outsiders’ interest and abandoning its core mandate of developing the region.

Governor Wike also urged NDDC to send their partnership support towards the reconstruction of the ongoing dualisation of  Eastern by-pass road where the NDDC permanent headquarters is located.
Interim Administrator and Chief Executive Officer of the NDDC, Effiong  Akwa said the visit was the first to be undertaken by his team to any governor in the region