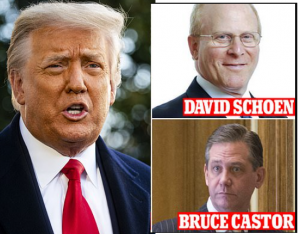 Former US President Donald Trump has hired two new attorneys to head up his impeachment defense team ahead of next week’s trial in the Senate.

The Republican was in need of new attorneys following the departure of all five members of his defense team last week.

Lawyers David Schoen and Bruce Castor, both experienced in criminal defense, will now head the new defence team in the trial set to begin in the US Senate on February 9, Trump’s office said in a statement.

In a statement, Trump’s office says: “Notably, Schoen has already been working with the 45th President and other advisors to prepare for the upcoming trial, and both Schoen and Castor agree that this impeachment is unconstitutional – a fact 45 Senators voted in agreement with last week.”

Both attorneys issued statements through Trump’s office saying they were honoured to take the job.

Castor said in the statement, “I consider it a privilege to represent the 45th President. The strength of our Constitution is about to be tested like never before in our history. It is strong and resilient. A document written for the ages, and it will triumph over partisanship yet again, and always.”

Castor has focused on criminal law throughout his career, while Schoen specialises in “civil rights litigation in Alabama and federal criminal defence work, including white-collar and other complex cases, in New York”, the statement said.

Schoen had already been working with the defence team, and he and Castor “agree that this impeachment is unconstitutional”, the statement said.

Trump, who left office on January 20, faces trial on a charge that he incited the mob that stormed the US Capitol building during the certification of President Joe Biden.

Schoen previously represented Trump’s former adviser Roger Stone, who was convicted in November 2019 of lying under oath to legislators investigating Russian interference in the 2016 election. Trump pardoned Stone in December 2020.

Castor is a former Pennsylvania district attorney known for his decision not to prosecute entertainer Bill Cosby in 2005 after a woman accused Cosby of sexual assault.

In 2017, Castor sued Cosby’s accuser in the case for defamation, claiming she destroyed his political career in retaliation. Cosby, 83, is now serving a three-to-10-year sentence after being found guilty in a 2018 trial of drugging and raping a onetime friend at his home in 2004.