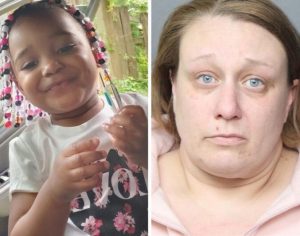 A daycare owner has been charged following the death of a two-year-old girl who mysteriously died in her care 5 months ago.

The 2-year-old isn’t the first child to die in the woman’s care but a reflection on the TV led to her arrest.

Kaylee Thomas’s death at the home of Jessica Anne Cherry on August 18, 2020 had been ruled indeterminate; but on Tuesday, Jan 26, the Chief Medical Examiner finally declared it a homicide, leading detectives to immediately arrest and charge the 37-year-old with second degree murder.

After the toddler died, police obtained a search warrant and discovered a Ring camera inside the daycare had been moved so that it faced a television screen.

But upon closer inspection, prosecutors claimed they could see several disturbing instances of abuse of other children the week before, caught in the screen’s reflection.

Police said they could make out Cherry covering an infant’s nose and mouth tightly with a cloth, and then abandoning him alone in a room.

In another instance, they said they saw Cherry slapping an infant. Audio of the child crying in pain could be heard in the court when the video was played during a bond hearing.

As a result, Cherry was charged with two counts of gross wanton or reckless care for a child, two counts of endangerment cruelty or injuries to children, stab/cut wounds with malicious intent and attempted malicious wounding, but faced no charges in the death of Kaylee.

It also emerged during that hearing that Kaylee wasn’t the first child to die in Cherry’s care that year.

The prosecutor mentioned she was being investigated after a one-year-old boy was found unresponsive at her home on January 16, 2020. He died at hospital four days later.

The cause and manner of the boy’s death have not been revealed, and no one has been charged.