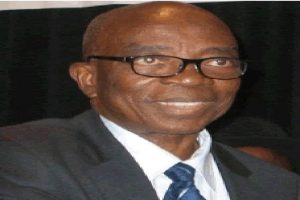 A former Minister of State for Finance and Minister of Commerce and Industry, Senator Jubril Martins-Kuye, has died. He was 78 years old.

Born on August 1942 in Ago Iwoye, Ijebu constituency of Ogun State studied sociology at the University of Ibadan (1965-1968) and then Economics at the Harvard University Business School, graduating in 1983. He gained qualifications as a Chartered Accountant.

May his soul rest in peace, Amen.