DO YOU AGREE? The Integrity Of The United States Of America Is Gone | Naijajoy 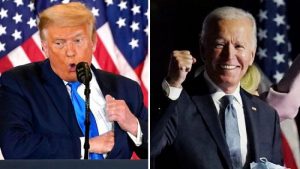 Recently we have all been witnesses to the demystification of the United States and her democratic institutions. Whereby the sitting President Donald Trump refuses to concede defeat and step down for the projected winner and president elect Joe Biden.

Sadly, there’s been no wimp of comment or call to order by any world leader. And that is the crux of the matter. The world is sorely devoid of leadership.

The hypocrisy of the West is at the fore. If this occurred in some other country, let alone some African nation, the West, with the United States at the forefront would have been at the vanguard calling for rule of law and respect for the constitution. Even imposing sanctions and other economic and political restrictions.

US marines have been mobilized to intervene even where there have been undisputed elections. America has had the temerity to lecture us on our comportment in our two last national elections.

What are the lessons for us?

It is time we grow up and assume responsibility of our fate, those we look up to are no better than us.