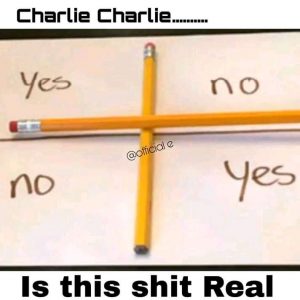 Do you believe on the Charlie Charlie game? Is it real? Have you tried it before?

The game is played by teenagers using held or balanced pencils to produce answers to questions they ask.

Basic set up for the two pencil game, with the top pencil balanced the same way as the other, such that minor air movements can cause it to rotate.

The game was popularized in the English-speaking world in 2015, partly through the hashtag #CharlieCharlieChallenge.

How The Charlie Game Works

Two pencils and piece of paper.
The two pencil game involves crossing two pens or pencils to create a grid (with sectors labelled “yes” and “no”) and then asking questions to a “supernatural entity” named “Charlie.” The upper pencil is then expected to rotate to indicate the answer to such questions.

The first question everyone asks by speaking into the pencils is “can we play?” or “are you here?” or “are you there?” The top pencil is precariously balanced on a central pivot point,

Meaning that it can easily rotate on the pivot due to slight wind gusts, or the breathing of players expecting the pencil to move.

I don’t believe in any of those shits trending on Twitter and Facebook. There’s no demon called ‘Charlie. All fake and doesn’t exist. Even if you call God, Jesus, Amadioha or Ogun, the pencil is still gonna move.

If you believe this shit, your brain need to be sanitized. Reason why y’all fall for fake prophets and pastors, because you believe anything and everything without a proper research. Learn to read books and be wise not to fall for tricks. Ignorance is a disease.