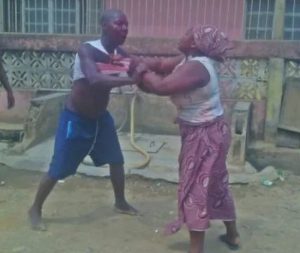 The police charged Njokwu, who lives in Surulere Area, off Basiri road in Ado-Ekiti, with assault and causing grievous harm.

The Prosecution Counsel, Insp. Oriyomi Akinwale, told the court that the defendant committed the offence on Dec. 24 at about 7 a.m in Ado-Ekiti.

Akinwale alleged that the defendant, bit Ifunanya Okonkwo on her left breast, inflicting her with a deep cut.

He said the defendant, who was a boyfriend to the complainant, attacked her during an altercation.

The offence, he said, contravened the provisions of Section 335 of the Criminal Code, Laws of Ekiti State, 2012.

The prosecutor asked the court for an adjournment to enable him to study the case file and assemble his witnesses.

The defendant, however, pleaded not guilty.

The defence counsel, Mr Emmanuel Sumonu, urged the court to grant his client bail in the most liberal terms.

The Chief Magistrate, Mrs Adefumike Anoma, granted bail to the defendant in the sum of N50,000 with one surety in like sum.

She adjourned the case till 26 January 2021 for hearing.

Last year July, a 22-year-old man, Precious Michael, was docked in a Magistrates’ Court in Asaba, Delta, for a similar offence.