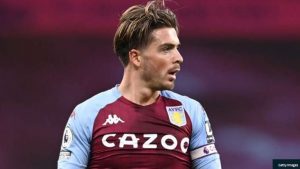 Jack Grealish believes the VAR is “ruining the game” after Aston Villa were denied a late equaliser against West Ham.

Having earlier missed a penalty on Monday, Ollie Watkins thought he had made it 2-2 in additional time, only for his strike to be ruled out by the VAR following a tight offside call.

Jarrod Bowen’s 46th-minute goal proved to be the winner after Grealish had cancelled out Angelo Ogbonna’s opener.

But after further VAR controversy in the Premier League, Grealish said the system was hurting the game.

“As for VAR, I’ve shared my views before and it’s now just getting borderline embarrassing with some off [sic] the decisions,” the England international wrote on Twitter.

“We’ve had a penalty we’ve missed, and a goal disallowed for a part of his body which can’t put the ball in the net anyway,” he told Sky Sports.

“The goal Ollie scores at the end, they’ve given it as offside for his arm, but the only reason his arm’s out there is because he’s getting fouled. He either scores or it’s a penalty. I still don’t understand that.

“I’m okay if it’s a red line and it says he’s offside. That’s the rule. But if his arm’s up there because he’s getting fouled, that’s a penalty.

“I won’t go home and think about VAR. It frustrates everybody, but there’s no point in getting worked up about it. It’s happened, I can’t do anything about it now.”