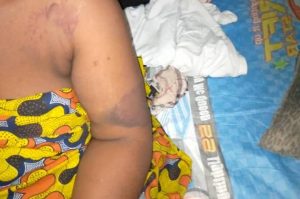 The Leader of Etche Local Government Council Legislative arm in Rivers State, Honourable Blackson Nwanyanwu and some members of his family have been accused of assaulting their brother’s wife on allegations that she is a witch.

Narrating her ordeal in a video posted by Ciy News Port Harcourt on Wednesday, November 11, Mrs Nwanyanwu alleged that Blackson and his siblings including their brother-in-law beat her to pulp after accusing her of being a witch and disturbing the family.

According to Nwanyanwu, after beating her up, one of them broke her head with a chair, leaving her bleeding profusely.

“I was shouting for help. Nobody was there only them and their family. They were all happy saying that I will not do anything. Nothing will happen. That their brother is a councilor.” she narrated.

It was gathered that the matter has been reported to the Federation of Women Lawyers (FIDA) Rivers State branch.

See more photos and videos below…