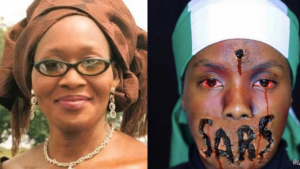 Nigerian journalist Kemi Olunloyo has advised Nigerian celebrities to flee the country as the Army and DSS are going to arrest most of them.

According to her, most of the Nigerian celebrities will be arrested by the end of the week over the EndSARS protest and the Lekki tollgate shootings.

Adding that most people thought he was crazy when she advised them to flee the country but are now going to be arrested because of the severity of the aftermath of the protest.

The Federal Government is trying all ways and means to blame the civilians for the horrific incident at Lekki tollgate and arresting these celebrities is just a step.